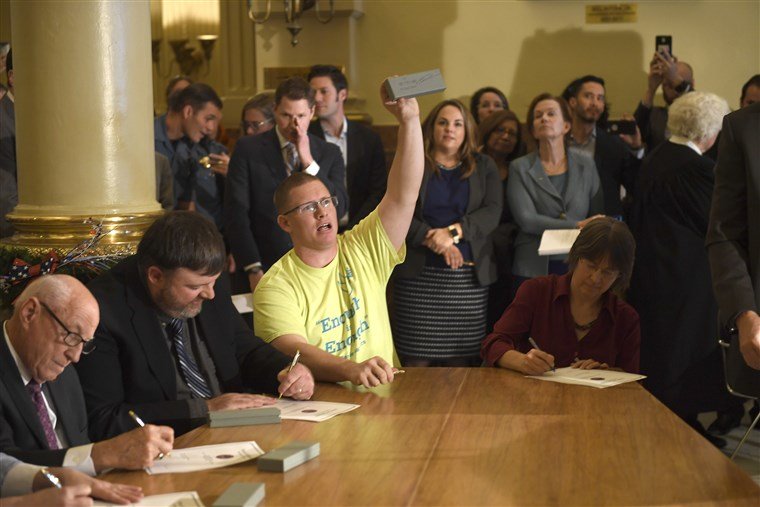 A case is currently before the United States Supreme Court involving if electors are obligated to vote for who the people in the state voted for or if they can change their vote and vote for somebody else.  People who support faithless delegates are hoping that they will get the golden Jackpot Capital Bonus and in all of the states where the people voted for the candiate who they do not support, that the delegates will become faithless delegates and vote for their favorite candidate.

What is the electoral college and how did the US end up with such a strange way of voting for the President?

In order to truly understand this topic, I would recommend watching the TV episode “Liberty’s Kids” episode 40 “We the People”.  It is available for free from YouTube.

The smaller states wanted every state to have the same number of votes.  The larger states hated this, because they felt that their larger states should have a larger say.

Benjamin Franklin proposed the solution of forming two houses in Congress. The House of Representatives are allocated by population, the senators in the Senate are 2 representatives for every state.  The House also has 5 additional “non-voting” members for each of the 5 territories of the United States: American Samoa, Guam, the Northern Mariana Islands, Puerto Rico, and the U.S. Virgin Islands.  There is also a representative for Washington, DC.

Number of electors in each state is the number of representatives in the House of Representatives plus the 2 senators.  So the smallest states have 3 electors, for example Delaware.  California is the largest with 55 electoral votes.

What are faithless delegates?

The people who support faithless delegates say that they are the last line of defense of a crazy dictator who has “hoodwinked” the public.

Another reason why people support faithless delegates is that it allows voting by popular vote without eliminating the electoral college.  Right now the Democrats LOVE this idea, because they believe that it will guarantee that the Democrat will ALWAYS be president from now and all future elections.  But just look at the results of the Iowa Caucus.  One Democrat candidate won the popular vote, while another candidate won the most delegates.  Even though both candidates said that they both support eliminating the electoral college, they did not hold onto the belief when it meant that they could not say that they were the winner of the election.

What is the National Popular Vote Interstate Compact?

This is an agreement between a group of US States and the District of Columbia to award all thier electoral votes based whichever presidential candidate win the popular vote.  This pact is designed to get around the Electoral College Requirement that is a requirement of the US Constitution.

If the US Supreme Court allows faithless delegates, then it will pave the way for the National Popular Vote Interstate Compact to become the standard.  In other words, all future Presidential elections will be decided by the most populous states.  As when the original US Congress was formed, citizens from small states feel that they will become “ruled over” by a few very large states.

Why are electors even physical people?

When the country was first formed, a majority of citizens could not read and write.  So they voted for an “educated” person from their community to cast a vote for them.  Today, most Americans have at least an 8th grade education.  Most websites are written between a 5th – 8th grade reading level, especially general news sites.

Americans no longer need a middle person to physically cast a vote for them.  They are educated enough to be able to vote for themselves.

People who support faithless electors believe that Ameircans are stupid and are not intelligent enough to vote for the “right” candidate, aka the candidate that the faithless delegate believes should be President.

This Supreme Court case will decide not only the faith of faithless delegates, but it will also indirectly decide the National Popular Vote Compact and potentially even if physical people are even needed for electors or should electors just be a concept that everybody understands and agrees to.