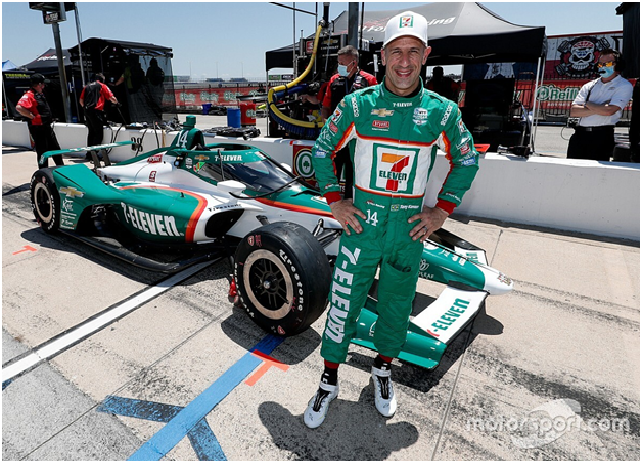 Tony Kanaan runs races for a living. He also runs races to stay in condition.

An Indianapolis 500 winner and an IndyCar series champion, in 2013, while winning the IndyCar title, Kanaan defied the odds of racing luck by running all 3,305 laps. That performance made him the first driver in IndyCar Series history to complete every possible lap during a season.

The Brazilian has competed in the Kona Ironman triathlon in Hawaii, covering the punishing 2.4-mile swim, 112-mile bike ride and 26mile run in a respectable 12 hours, 52 minutes and 40 seconds. He is absolutely certain that both of these pursuits are a true test of his physical and mental abilities and that both require tremendous athleticism.

“Tony Kanaan” by Motorsport is licensed under CC BY 3.0

Which does he consider to be the tougher challenge for his mind and body? Well, the answer might surprise you.

“I would say yes, driving a race car is tougher,” Kanaan told the Windsor Star. “The triathlon is a lot longer, but I will take racing before the triathlon in terms of toughness.”

A 2008 study conducted by Wired Magazine backed up Kanaan’s thesis.

“Dishing out inertial forces of up to 5 Gs, racing is one of the most gruelling tests your body can endure while seated,” the study noted. “Success demands a rare ability to stay calm and focused for hours while piloting a screaming land rocket mere inches from other victory obsessed psychos.”

Kanaan readily admits that he doesn’t do triathlons to compete for victories, but rather to help maintain his conditioning for racing. He mainly contests Ironman 70.3 events.

Driving a race car might be the toughest workout that a person can face while still sitting down. Some would suggest that race car drivers aren’t athletes. Those folks would be wrong.

“People that don’t think we’re athletes, I invite them to do a lap with us,” Kanaan said. ”Then, they can feel what we feel.”

Driving your car is nothing compared to driving his car.

“People don’t realize how difficult and physical it is,” Kanaan said. “People relate it to just jumping into their normal street car, turning the AC and the stereo on and going.

“We pull off a lot of Gs, and we don’t have power steering, so it is extremely, extremely difficult, and physically demanding. For two-and-a-half hours, we’re not drinking, we’re not eating.

“It’s tougher than anything I’ve ever done, and it’s extremely stressful.”

“Tony Kanaan” by indycar.com is licensed under CC BY 3.0

Yoga, weight training, distance running and mountain biking are all part of an auto-racer’s daily workout regimen. IndyCar driver Marco Andretti runs up to nine miles a day, usually in near 90-degree heat.

Drivers prefer to train in sauna-like conditions to simulate the internal heat created by the fire suits they wear on race day, often resulting in them sweating off as much as seven pounds over the course of a race.

World-class drivers own thick, muscular necks and powerful arms like NFL linebackers, and share the visual and mental focus and quick-twitch reflexes of an NHL netminder.

With the variety of circuits that are part of the IndyCar Series – ovals, road races and street courses – each presents its own challenge to those behind the wheel of these racing machines capable of exceeding speeds of 200 mph.

For instance, during the course of the season, drivers are required to go from the breakneck pace of the 2.5-mile oval at Indianapolis Motor Speedway, where the Indianapolis 500 is contested, to the rough and tumble Belle Isle street course that is home to the Detroit Grand Prix, at which two races are contested on successive days.

“We go from the most mentally demanding track in Indy to one of the most physically gruelling weekends – a doubleheader on a bumpy street course,” Andretti said. “One of them is super mental. It actually takes from your physical because of how on it you have to be for 500 miles.

“And then Detroit is just physically gruelling and you have to wake up and do it all again on Sunday. But I welcome it. I think it really brings out the fitness in drivers and how you’re able to recover.”